Disease Begins in the Gut – So, Why Aren’t you taking a Probiotic?

We’ve grown up thinking that we can eat anything and that our bodies will take it. Unfortunately, after two generations of eating a diet full of processed foods high in sugar and low in nutrients, it’s begun to affect our nation’s health.

Today, many people suffer from digestive issues. Many of these digestive-related illnesses were unheard of a generation ago. Acid reflux, indigestion, heartburn, constipation, and IBS are just a few names most of us recognize easily, if not experienced them. There are also more severe diseases, like Crohn’s, Celiac, and Diverticulitis. Our digestive system is responsible for regulating an estimated 70% of our immune system, and we’ve learned through science that disease begins in the gut.  So, why is gut health mostly overlooked? 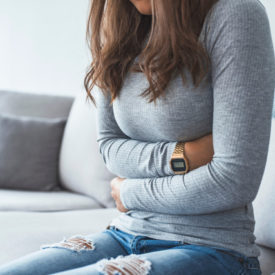 Here are some interesting facts:

-Our digestive system contains 10x more health-determining bacteria than the rest of our body.

-There are millions of microbes living in our bodies that serve various functions.

When the harmful bacteria in our gut begin to run rampant, we experience significant health problems. The harmful bacteria cause damage to the small intestine; they also release toxins into the body and hinder essential functions in the body and brain. Our gut health influences many processes in our body, not just digestive complaints. For example, several common illnesses linked to gut-flora imbalances are auto-immune diseases, food allergies, eczema, and even autism. The gut is referred to as “the second brain” because it regulates so many functions of the brain.  It makes up to 80% of our serotonin, and scientists have found brain cells (neurons) in our digestive tracts.

After living through the worst part of the worldwide Covid-19 pandemic, having a strong immune system seems more critical now than ever.  One way to restore gut health and balance is to take a daily probiotic.  Probiotics stave off the harmful bacteria floating around in our guts and keep the good ones where they belong. 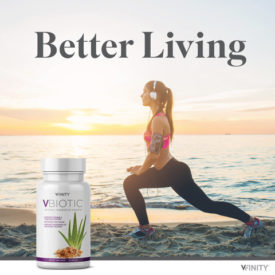 Vbiotic, Vfinity’s specially formulated probiotic, was specially crafted with a unique capsule technology that allows the billions of good bacteria within the capsule to NOT die off in your stomach acid.  Vbiotic digests where it should – in your intestines, allowing the good bacteria to be absorbed.